Before White Settlement (before 1851)

The area that is now Seattle has been inhabited since the last ice age, roughly 11,000 years ago. Migrants who would become the Duwamish tribe of Native Americans settled here after crossing the Bering Strait from Siberia.[1] These tribes made their living by fishing and hunting, so they chose areas near water to build permanent villages. The primary structures in these villages were longhouses, which served as the living quarters for a large extended family up to 40 or more people.[2] Given the proximity of villages to water, the main means of transportation was by canoe. By the time white settlers arrived in the area, there were as many as 17 villages settled by the Duwamish, made up of at least 90 longhouses.[3]

The settlement of the region by whites began in 1851 by group of people known as the Denny party. This group included a few key people credited with the founding of Seattle: David Denny, John Low, and Lee Terry. These men travelled by boat from Portland to scout the Puget Sound for a new settlement. On September 25th, 1851, they arrived at the mouth of the Duwamish river, and 3 days later they selected claims at Alki Point.[4] The Alki Point settlement was organized into six blocks and eight lots. John Low returned to send for the rest of the party while Denny and Terry stayed behind to build a cabin for their arrival. On February 15th, 1852, Arthur Denny, the older brother of David Denny, and two other men, Carson Boren and William Bell, selected claims on an alternate site at Elliott Bay. Villages grew out of each site and were in competition with each other for what would eventually become Seattle.[5] It soon became apparent that the tides in the winter months would wash away any piers built at Alki Point. Despite the land being more level and suited for construction at Alki Point, Elliott Bay proved to be a better location, and by April 1852, most of the Denny party relocated there.[4]

The Elliott Bay settlement grew out of 960 acres along the waterfront, split between Denny, Boren, and Bell. There was an abundance of lumber, and the demand from cities like San Francisco allowed logging to provide much of the economic growth of nascent Seattle. By the end of 1852, the last two important figures in the birth of Seattle arrived: David Maynard and Henry Yesler.[6] Maynard ventured to Seattle at the request of his friend, Chief Seattle of the Duwamish tribe, for whom the city would later be named after.[7] Maynard was given part of Boren’s plot and claimed more of his own to the south. While Denny and Boren had chosen to plat their land with a grid following the shore, Maynard chose to align his grid by cardinal directions, which caused the streets to bend where they met up with the other grids. This can still be seen today in downtown Seattle which grew out of these plots. However, Maynard’s grid was ultimately used in the future expansion of the city and throughout the county.[8] This conflict of vision between developers highlights the lack of a cohesive plan for early Seattle. The other important figure, Henry Yesler, came to Seattle with the intention of building a profitable lumber mill. Yesler was given a strip of land between Maynard and Boren, which became Yesler Way. Here, he built his lumber mill as well as a large cookhouse. The cookhouse, being the largest structure in the town, was rented out by Yesler for public meetings.[6] Both the lumber mill and the cookhouse made Yesler a very wealthy man as well as set Seattle up to be one of the most important cities in the region. 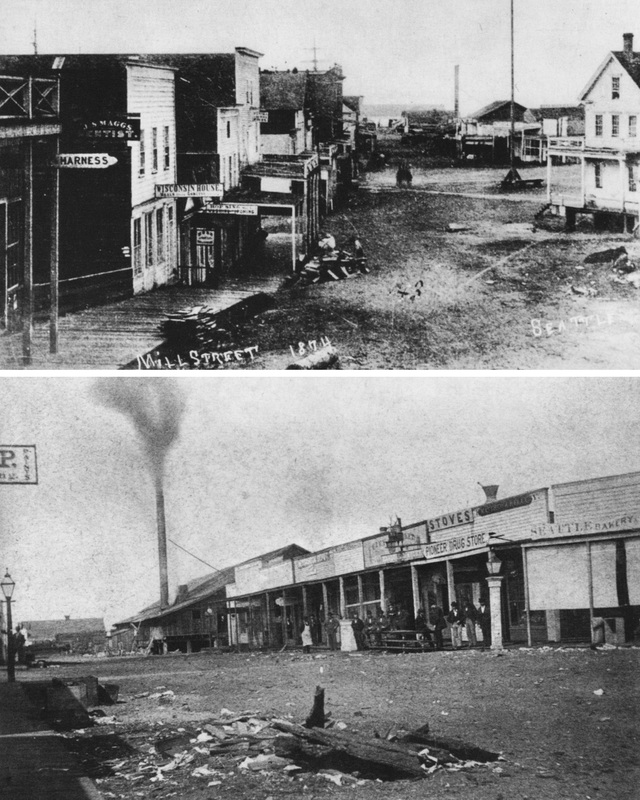 Skid Road and Yesler's Mill.[19]
The original settlers of Seattle continued to contribute to the growth of the city. Arthur Denny attempted to have the state capital moved to Seattle, though he was unsuccessful and Vancouver was selected instead. He did however secure Seattle as the location for the University of Washington by donating 10 acres of land for its construction. Lee Terry donated additional land to the University of Washington, which still generates revenue as housing today. He also pushed for policies that developed water systems and street grades.[6] David Denny donated land for a cemetery, which he later rededicated to the first ordinance-designated public park.[9] Seattle was first incorporated on January 14th, 1865, but was subsequently unincorporated after a petition by citizens on January 28th, 1867. It was reincorporated on December 2nd, 1869, along with the first city Charter. From 1870 to 1890, the population of Seattle grew from 1107 to 42,800.[10] 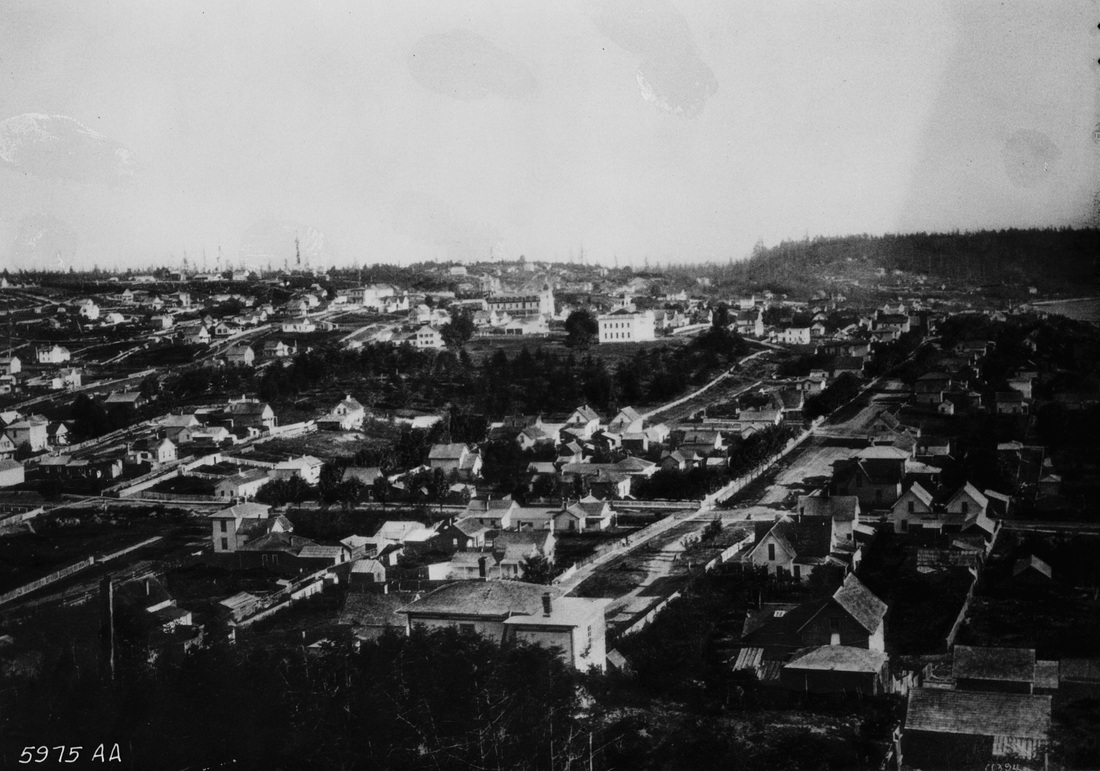 The earliest transportation for the settlers, like for the Duwamish natives, was heavily reliant on water. As a consequence, much of the early growth of the city was tied to the waterfront. Logs were skidded through town to the mill, where timber could be shipped up the Puget Sound. Efficient land transportation was slow to develop. In 1873, Tacoma was chosen as the terminus of the Northern Pacific Railway, bypassing Seattle. In response, Seattle chartered its own railways with minor success: the Seattle & Walla Walla Railroad and the Seattle, Lake Shore and Eastern Railway. The Seattle & Walla Walla Railroad began construction in 1874, but never ended up reaching Walla Walla. It did however reach towns that were able to supply coal to Seattle. The Seattle, Lake Shore and Eastern Railway began later in 1885, and brought growth to towns along its route. [11] Transportation within the city was slow to develop as well. It wasn’t until 1884 that the first horse-drawn streetcar was introduced in downtown Seattle along 2nd Avenue. Despite the initial slow growth of transportation, the next 5 years would see the introduction of the first cable car and the first electric streetcar.[12] 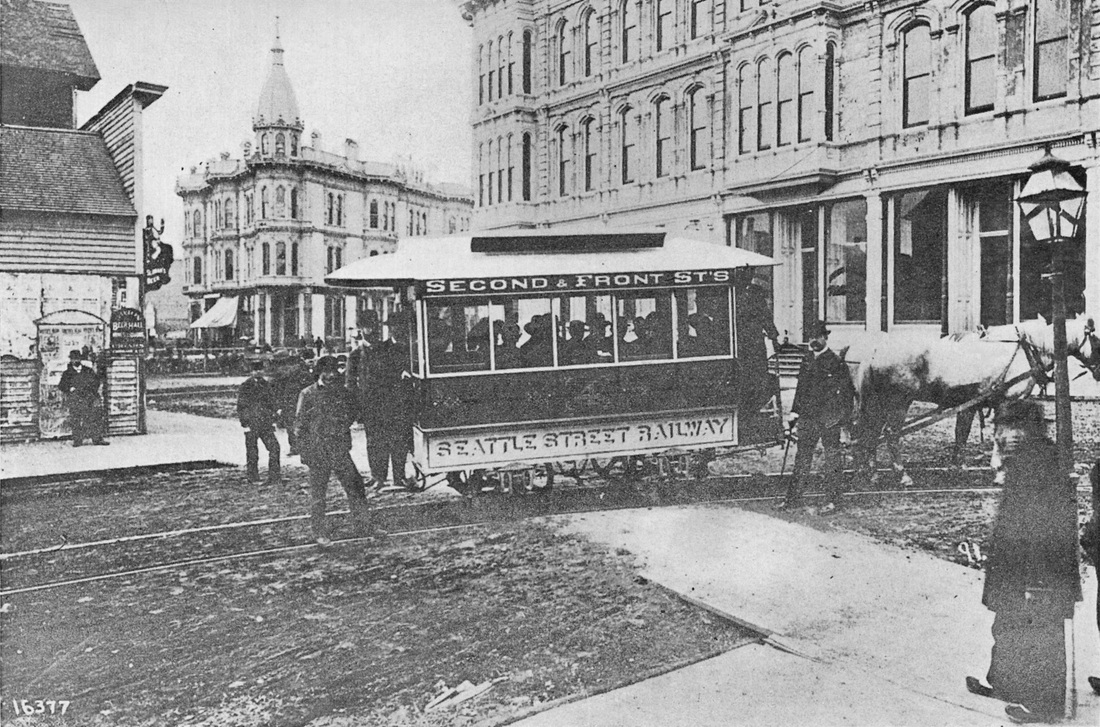 The relationship between white settlers and the native Duwamish was tense, despite the city being named after a Duwamish chief. Settlers in Washington were steadily encroaching on tribal land and driving away the natives, which was in violation of the United States Nonintercourse Act. In 1855, the Treaty of Point Elliott was drafted to settle this, with the natives relinquishing their title to the land in exchange for reservation land. Native tribes were driven to war when this promised reservation land was not provided. David Maynard, friend of Chief Seattle, helped to diffuse this situation by personally funding supplies and transportation for the Duwamish to a privately funded reservation, Port Madison. The displacement of the tribe, along with break out of smallpox epidemics, was evident in the very small presence of the Duwamish in the demographics of early Seattle.[13]

The demographics of the settlers were hardly diverse. As a frontier town, the original settlers were mostly white males looking for work in logging. In this time, men in Seattle outnumbered women ten to one. The lack of marriageable women needed to be addressed if Seattle was going to continue to grow. Asa Mercer, president of the University of Washington, developed a plan to travel back to Eastern United States to recruit young women to be brought back to Seattle to live with married couples until they could find husbands. His first trip brought back 11 women, affectionately termed the Mercer Girls, most of whom were married shortly thereafter. With the success of his first trip, he raised funding to make a second trip, but fell short of his goal and only returned with 34 women.[14]

The last great event that contributed to the growth of Seattle during this time period was the Great Fire in 1889. The fire started in the basement of a woodworking shop in downtown Seattle. The volunteer fire department responded quickly, but the water supply, which was privately-owned, did not provide enough pressure to fight the fire effectively. The fire destroyed 29 blocks of the business district, mostly wooden buildings. Despite all of the damage, estimated to be $20 million, there were no deaths due to the fire.[16] Instead of setting the city back, reconstruction began almost immediately, with a new ordinance in place requiring new buildings to be constructed from brick and stone. Streets were widened and raised, in some places by up to 22 feet, which left some old storefronts underground and eventually abandoned. Additionally, the city developed its own fire department and expanded the water supply to prevent another disaster. After a year, the city was rebuilt. Along with the construction of 465 new buildings, the population grew from 25,000 before the fire to 43,000.[17] 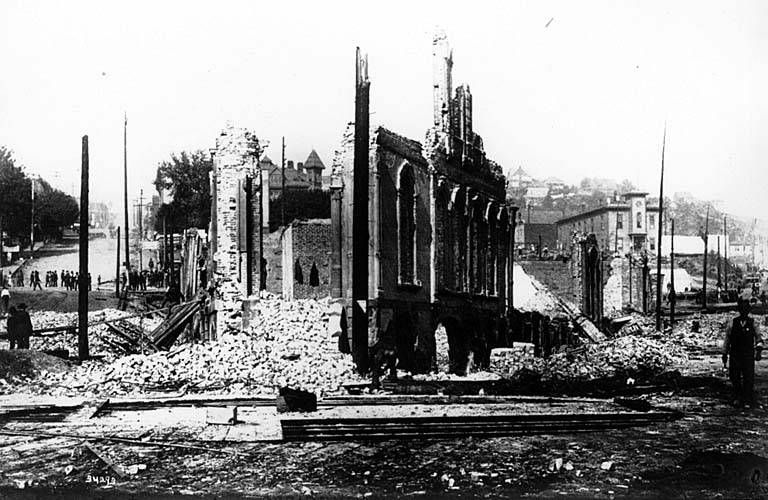 Occidental Hotel after the Great Fire.[22]
One of the more notable neighborhoods that were rebuilt after the fire was Pioneer Square, located on part of the original plots claimed by Boren and Maynard. In addition to being constructed out of brick and stone, the new buildings used the Richardsonian Romanesque architectural style. Given that the entire area neighborhood was rebuilt in such a short time period, there was a great uniformity in style of all the buildings, which can still be seen today.[18]